The Sentinel Cross Country teams hosted Aurora Central Catholic and Immaculate Conception on Tuesday this week for the third home meet of a five-meet homestand. It was a cloudy, cool and breezy afternoon with temperatures nearly ideal in the 60s but quite humid.

As is our tradition during the season, we go up against tough competition early on with the goal of making us better later on in the season. That was the case in both races for us. On the girls side, it was Immaculate Conception (8th place at State last November); on the boys side it was Aurora Central Catholic (returning state qualifiers from last season) that provided our toughest tests yet.

In the girls race, it was Lizzy Szynal again leading the Sentinels as she battled two IC runners for the win (one of those was returning All-State runner Carly Manchester, who ran 17:47 last year at Detweiller Park to finish 12th). Ultimately, she got out just a little too fast and paid the price in the end, but still ran a very quick 20:19 for third place behind Manchester and Kennedy Calcagno. Mikayla Hickey followed in eighth place with 22:17 which is a new career best on this home course for her. Annikah claimed 13th in 23:47, Makenzie 16th in a career best 25:32 at home, Callie and Grace went back to back in 18th and 19th in 25:58 and 26:16 respectively.

In the team battle, however, the IC girls took four of the first five and five of the first seven scoring spots and that was simply too much for the Sentinels to overcome as IC beat the Sentinels soundly, 19-41. The battle with Aurora Central Catholic was closer, but the Sentinels ultimately fell just two points short, losing by a minuscule 27-29 margin.

In the boys race, unfortunately, the Sentinels were beset by injuries. Tim Rosland, Oliwier Kowalski, Gavin Greaney, and Luke Dea all were forced to sit out this race due to various minor injuries. That meant the Sentinels only had three runners in the field. All three runners ended up setting either season and/or career bests on the home course. Henry O'Connor led the way on this Tuesday afternoon with a ninth place overall finish in 19:43, followed just seconds later by Kaleb Sica in 19:50. Max Windisch took 15th in 21:10, dropping over 40 seconds off his previous season best.

The Sentinels did not score as a team in this meet, in any case, Aurora Central Catholic swept the seven of the first eight scoring spots overall to win decisively over Immaculate Conception.

We did have a few PRs set at this meet - check them out below! 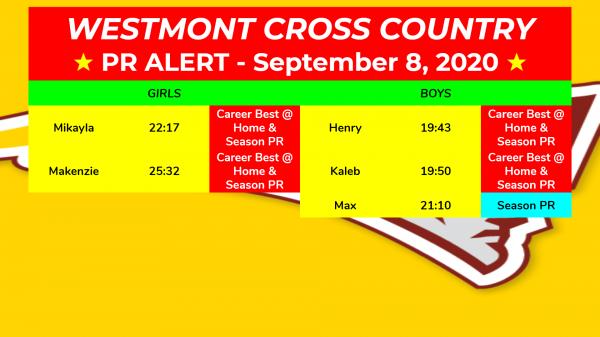