The Sentinel Cross Country teams returned to action on their home course this morning for the first time in more than a dozen years - the last Saturday meet we hosted at home was the 2007 Westmont Invitational, held that year on September 8.

It was a bit windy - and actually warmer than expected - as the Sentinels prepared to take on Ridgewood and Timothy Christian. After Tuesday's switcheroo when the boys ran first instead of the girls, this meet went back to the regular order.

In the girls race, Lizzy Szynal shot out to a large lead in the first mile and never looked back on her way to breaking the 20:00 barrier for the second time in as many meets, recording a 19:59. That means she now owns two of the top ten fastest times ever run by Westmont girls on this home course since the girls began running three miles in 2002. Then came a boatload of Wheaton Academy Warriors which ensured that they would win handily. They're a good team, for sure. Mikayla Hickey led the rest of the Sentinels across the finish line in 11th, followed by Annikah Engstrom, who took off 20 seconds off her time from Tuesday to claim 17th. Then it was the trio of Makenzie Blaine, Grace Spezia and Callie Devine who finished 22nd, 23rd, and 25th, respectively. Wheaton Academy won the meet 20-43, but the Sentinels claimed a win over Ridgewood, bringing their record on the season to 1-3.

In the boys race, Tim Rosland again led the Sentinels and took off more than 20 seconds of Tuesday's time on the way to breaking 18:00 on our home course for the first time in his career in a fourth place finish in 17:53 - Wheaton Academy swept the top three spots overall. Henry O'Connor finished 10th overall and improved upon his time, dropping from 19:59 to 19:56. Kaleb Sica battled a Ridgewood runner down to the end, unfortunately, the Ridgewood guy got around him right in the last few meters, giving Kaleb an 18th place finish. Then it was the senior trio of Gavin Greaney (a PR by more than 20 seconds as well), Max Windisch, and Luke Dea that finished 28th, 29th and 30th. In the team race, it was the same story as the girls race: Wheaton Academy overwhelmed the Sentinels, winning by a score of 17-46, but the Sentinels squeaked out a 27-29 victory over Ridgewood, which brings the boys' record to 1-2 on the season.

The teams will practice on Labor Day, followed by the third home meet in a row against Aurora Central Catholic and Immaculate Conception followed by a Friday afternoon meet against Chicago Christian and Riverside-Brookfield. 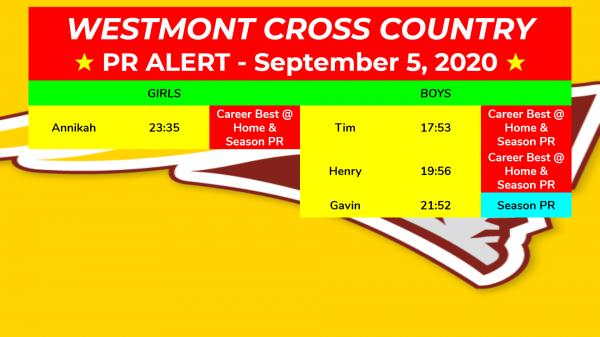