On yet another cloudy, cool, humid and breezy day, the Sentinels hosted Chicago Christian and Riverside-Brookfield at home for the fourth consecutive home meet of the season. In another indication of just how unusual this season (and entire calendar year) is - the meet was held on a Friday afternoon. We (the coaches) could not remember the last time we had a Friday afternoon meet, let alone a home meet on a Friday. Typically our meet schedule goes Tuesday-Saturday. Over the years there has been the occasional Thursday meet (particularly in the late 1970s through mid/late 1980s), and the Amboy Columbus Day Invitational is always run on a Monday.

So... we looked back at the record books... and kept looking back, back, way back. Turns out the last time the Sentinels had a Friday meet of any kind (home or invitational) was ... September 2nd, 1977 - which was a home meet AND just so happens to be the very first meet we currently have in our database records. So, for the first time in 43 years, the Sentinels had a Friday meet on the schedule.

We were looking to have a good meet on this day - our athletes have been training hard and we were hoping this meet would provide an indication that that training was paying off. And boy, did we get it.

In the girls race, Lizzy Szynal again led the Sentinels. She battled a Riverside-Brookfield girl step by step for nearly the entire race. Unfortunately as the duo turned behind home plate of the softball field for the final stretch to the finish, the RB girl turned on the jets and pulled away for the win as Lizzy settled for second place. Annikah Engstrom was our second runner on the day, setting a huge PR to finish sixth overall (more on the PR mania from Friday below), as Mikayla Hickey unfortunately had to drop out due to a minor injury that she incurred during the race. Hopefully we'll have Mikayla back and ready to go on Tuesday against Elmwood Park. Callie Devine followed in 19th, setting a giant PR as well; Grace Spezia came in 22nd with yet another PR, and Evelyn Kostal returned to the lineup after a week's forced quarantine to finish 25th in 27:16.

In the boys race, Tim Rosland returned to lead the Sentinels. He was in the front pack for the first two miles, but unfortunately fell off the pace (he reported "the worst side stitch I've ever had" after the race) but still finished in a strong 18:24 for 12th overall. He'll get another crack at a sub-18 time on Tuesday against Elmwood Park. Kaleb Sica dropped a huge PR to finish 15th; Henry O'Connor finished just steps behind Kaleb in 17th with yet another PR on the afternoon. Then it was our senior trio of Oliwier Kowalski, Gavin Greaney (still nursing a minor injury) and Max Windisch that all set yet more PRs in finishing 27th-31st-32nd respectively. Luke Dea finished 35th for the Sentinels and just missed a PR by two seconds.

In the team battle, Riverside-Brookfield has a deep team (They qualified for Class 2A State last year and finished 20th: They had five guys sub-17 on Peoria's Detweiller Park last season) and swept the Sentinels clean 1-7, resulting in a "perfect" score of 15 for them to win 15-50 over us. The race against Chicago Christian was closer, but ultimately the Knights had three in before Tim and four of the first five, which is very hard to overcome and the boys fell to Chicago Christian 19-38.

While it wasn't as crazy as the 29-9 baseball game between the Braves and Marlins earlier this week, we do have a long list of PRs/career that our athletes can be very proud of:

Here is the entire PR graphic in all its glory: 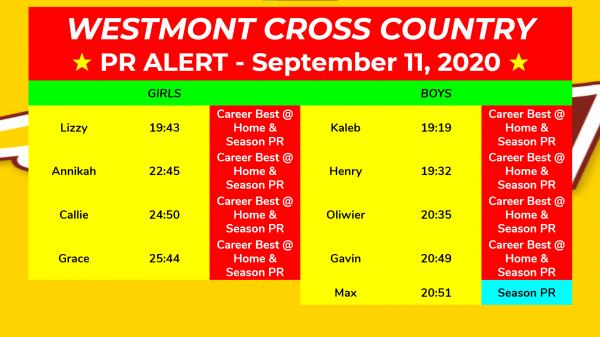 The Sentinels return to action on Tuesday at home against Elmwood Park, followed by a trip to Cantigny Park for the St. Francis "Spartan" Invitational.